GW-BASIC was a dialect of BASIC developed by Microsoft from BASICA, Microsoft BASIC and Altair BASIC (for the Altair 8800), originally for Compaq.

GW-BASIC is compatible with Microsoft/IBM BASICA, but was disk based and did not require the ROM BASIC. Microsoft bundled GW-BASIC with MS-DOS operating systems on IBM PC compatibles.
Microsoft also sold a BASIC compiler, BASCOM, compatible with GW-BASIC, for applications requiring more speed. The language was suitable for simple games, business programs and the like. Since it was included with most versions of MS-DOS, it was also an inexpensive way for many would-be programmers to learn the fundamentals of computer programming. With the release of MS-DOS 5.0, QBasic, a cut-down version of the separately available QuickBASIC compiler, took eventually GW-BASIC's place.
The main limitations of GW-BASIC are the 64kB program size limit and the lack of structured programming. Therefore, this language was inappropriate for large projects. 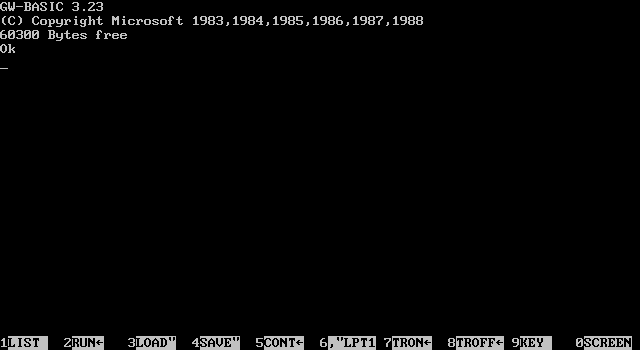 GW-BASIC has a command line-based Integrated Development Environment (IDE) based on Dartmouth BASIC. It also includes function key shortcuts at the bottom of the screen. Like other early microcomputer versions of BASIC, GW-BASIC lacked many of the structures needed for structured programming such as local variables, and GW-BASIC programs executed relatively slowly, due to the fact that it was an interpreted programming language. All program lines must be numbered, all nonnumbered lines are considered to be commands in direct mode to be executed immediately. The format of program source files is normally binary compressed with tokens replacing commands, or optionally ASCII text form.

The GW-BASIC command-line environment has commands to RUN, LOAD, SAVE, LIST the current program, or quit to the operating SYSTEM; you can use these commands also as program statements. There is little support for structured programming in GW-BASIC. All IF/THEN/ELSE conditional statements must be written on one line, although WHILE/WEND statements may group multiple lines. Functions can only be defined using the single line DEF FNf(x)='mathematical function of x' statement (e.g., DEF FNLOG(base,number) = LOG(number) / LOG(base)). The data type of Variables can be specified with a character at the end of the variable name: A$ is a string of characters, A% is an integer, etc. Groups of variables can also be set to default types based on the initial letter of their name by using the DEFINT, DEFSTR, etc., statements. The default type for undeclared variables not identified by such typing statements, is single-precision floating-point.

GW-BASIC allowed for the joysticks, mice and light pen input devices of its time. GW-BASIC can read from and write to files and COM ports; it can also do event trapping for ports. Since the cassette port interface of the original IBM PC was never implemented on compatibles, cassette operations are not supported. GW-BASIC is able to play simple music using the PLAY statement, requiring a string of notes represented in a music macro language (e.g. PLAY "edcdeee2dfedc4"). More low-level control is possible with the SOUND statement, which takes the arguments of a hertz frequency and a length in clock ticks played through the standard internal PC speaker in IBM machines. Consequently sound is limited to single channel beeps and whistles as befits a 'business' machine. Home based PCs such as the Tandy 1000, allowed up to three channels of sound for the SOUND and PLAY commands.

A well programmed GW-Basic program is made of the following parts:

There are several theories on what the initials "GW" stand for. Greg Whitten, an early Microsoft employee who developed the standards in the company's BASIC compiler line, says Bill Gates picked the name GW-BASIC. Whitten refers to it as Gee-Whiz BASIC and is unsure if Gates named the program after him. The Microsoft User Manual from Microsoft Press also refers to it by this name. It may have also been nicknamed Gee-Whiz because it had a large number of graphics commands. Other common theories as to the abbreviation origins include "Graphics and Windows", "Gates, William" (Microsoft's president at the time), or "Gates-Whitten" (the two main designers of the program). 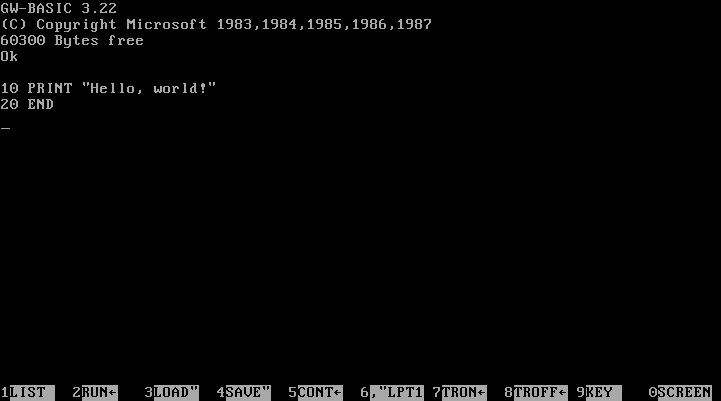